#15mlliure / “I was also outside the Parliament building during the riots”. More than 1000 people have demonstrated in #Barcelona 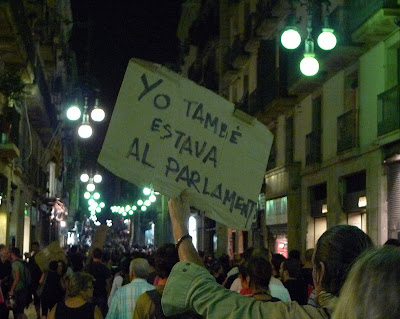 Nothing is the same for the indignados movement in Barcelona after June 15th, the day in which some of them were very agressive with Catalan MPs trying to enter inside the Parliament building at Ciutadella Park. Some of the images were terrible and a big part of the Catalan public opinion -which until that moment supported the movement- thought that enough was enough. Still a majority of Catalans seem to share the indignados ideas but not what they did that day…
Today Catalan police has arrested 4 of the 22 demonstrators that were recognised as having taken part in the riots.
The reaction of the indignados has been to demonstrate again downtown: plaça Catalunya, Ramblas and pl Sant Jaume -where the Catalan Government has its main offices and so does the City Council.
Demonstrators have shouted: “I was also there, in the Parliament”, as a form of solidarity with those detainned.

Is it an outlet or chapter 11? @touchjewelry #Barcelona #bcn