8000 police in #BCN, student strike and #ECB summit to decide that rates keep their level 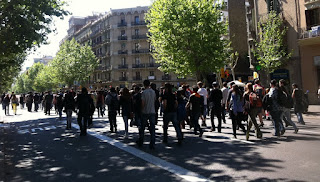 Still, don’t missunderstand the tittle of this post. Up to now (9.30 PM), it has been a sunny, clear, maybe a little bit windy day in Barcelona. The European Central Bank met in Hotel Arts, 8000 police were there to prevent any possible violent action, and the students marched peacefully through the city. We may conclude that if what the European Central Bank had to decide was to keep interest rates at 1% they could have done so in Brussels. But who knows, maybe it is better that from time to time ECB responsibles meet in a hotel in front of the Mediterranean, that might inspire them and in these difficult times we should also (or even mainly) count on inspiration. By the way, I bought a local newspaper today (LV) because they had announced that they were giving a surprise gift (a book) to their readers. Do you know which one I got?: “May you have a little bit of faith”, by Mitch Albom. Yes! 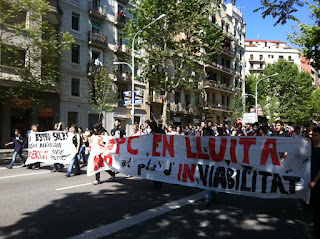