A weekend full of celebrations in La #Rambla / @ramblejant #barcelona 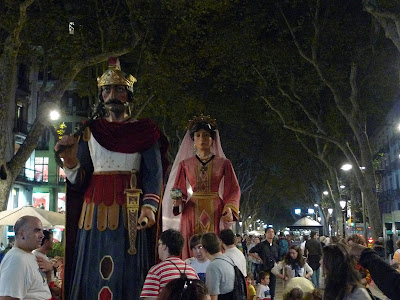 There have been many discussions in the last two years in Barcelona about what to do with La Rambla, the main touristic street. People whose opinion is very important in the city (like Quim Monzó, maybe the most influent newspaper columnist in Barcelona right now) have been regretting the lost of what used to be a popular avenue, full of local life. It has been transformed, he says, in something similar to an amusement park, a tourist amusement park.
There is a group of people called “Friends of La Rambla” -composed by people who live there but also shop-owners and citizens from elsewhere in the city but with a link to the street- who are doing their best to keep Rambla -or Rambles- local and full of locals. Once a year they organise a popular party, a Festa Major as if Rambla was a small Catalan Village. That’s why you see these two giants in the picture, trying to cross the long street, from east to west. Look at the video and you will get a better idea of what they are doing. Here you will find all the info about the celebration (october 1st and 2nd 2011).