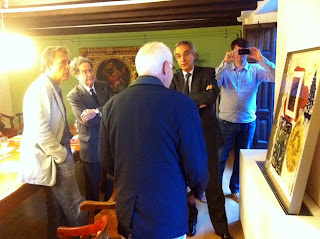 The Ateneu Barcelonès is a cultural club founded 150 years ago in Barcelona. It is a well recognised institution of the city, placed downtown near the Rambles. Tonight, artist Joan Pere Viladecans has given one of his works as a donation to the institution. As an artist some see in his work the influence of Antoni Tàpies and Joan Brossa. Mr. Francesc Cabana, president of the Ateneu Barcelonès, has received the artistic work in representation of all the members of the club.