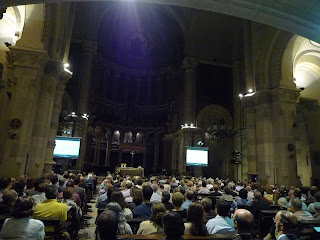 Yes, when I was born Barcelona was mainly catholic and as I see it, it no longer is. The sociological reality of a majority being catholic and going to church every Sunday (as our grandmothers used to do) is over. Not only because immigrants have broutht to the city different muslim, evangelical and indian celebrations but also because agnosticism (more than atheism, I would say) is a wide reality. People that search, find new (maybe old) spiritualities based on silence.

However, the Catholic reality and decadence in Catalonia is not that simple to explain. There is a very interesting side on the Catalan Catholic Church that since the 60’s and still now defends the principles of the Vatican II Council. The jesuits, for example, have been very active and in the last 40 years have shown a very progressive attitude towards life.

Last friday around 200 members and followers of a group called “Cristianisme i Justícia” (Christianism and Justice in English) met inside the church of one of the main Jesuit Schools in Barcelona (Casp) to celebrate 30 years of their periodical booklets called “Quaderns“. They contain social studies on very different matters: unemployement, poverty in the city, peace, justice, and so on. I have read some of them in the last 20 years and they are very well done. Organisers said that their goal is to keep their philosophy of social justice divulgation. This means that they will continue publishing studies and will keep close to people’s problems and facts, which as you know is not easy at present. This is a good news because these studies are very interesting and well done. There was music during the event, by Luis Guitarra.