Hundreds of demonstrators in #Paris to defend free speach and Charlie Hebdo, the magazine attacked with a molotov bomb 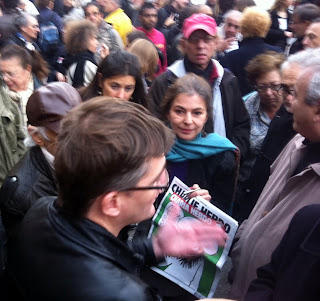 Paris is just an hour flight from Barcelona, I was there on Sunday and I happened to be by chance in a demonstration in support to Charlie Hebdo, and satiric magazine that was attacked one week ago by islamist radicals. The magazine had published an issue making fun of the fack that an islamist party had wone the elections in Tunisia.

During the demonstration I could hear many speaches defending a secular France, against attacks either from extreme right or islamists. At the end of the demonstration a young journalist made a short interview to Charps, the main responsible of the publications and in the video you can hear what he answered. To make it short he said that “if a radio or any other media is thretened, it can count on Charlie Hebdo.

(On the same subject you may also read this and this post, in my blog in Catalan)