Music at a #gay #NGO in @BcnEixample 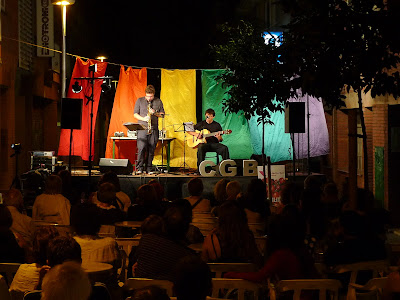 The left side of Eixample (or Gayxample as some like to call it) concentrates a big part of the gay day and specially night activity in Barcelona, meaning commercial activity, not fight. However there is a combatent group that has its headquarters there, it is called the Col·lectiu Gai de Barcelona. Nothing to do with discos, pubs or expensive clothing. Once a year they take part in the celebrations of their district, and that was the case last Saturday, in which they organised a mini-concert in the Passatge Valeri Serra, a typical tiny street of the XIX century Barcelona. You may have a look at the video if you wish to hear how well the music sounded.