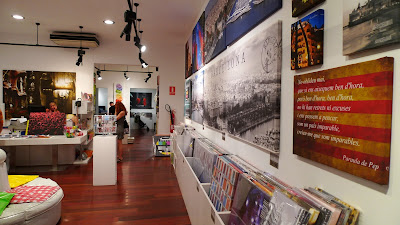 Petritxol is a tiny street where Barcelonian dwellers like to go and have hot chocolate. It is also well known for its art galleries. Six months ago a new shop opened called “Look now”, it sells pictures of the city of Barcelona in all sizes. Yesterday I saw that it has printed a poster with the words that Pep Guardiola -coach of FCBarcelona- pronounced when he was given a medal at the Catalan Parliament last week: 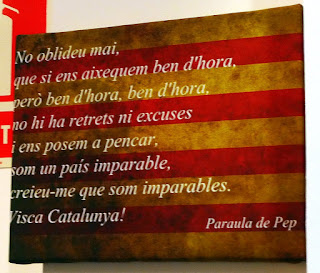 These are the words: “And don’t forget that if we wake up early in the morning, very early, with no reproaches to anybody and using no excuses, and we start working hard, we are an unstoppable country. Believe me that we are unstoppable. Long live Catalonia!”

It is not an expensive poster: “I don’t want to win money with Pep Guardiola’s words, I just want to make them still more popular”, says the shop keeper.