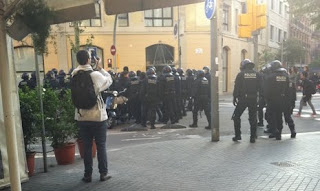 The police entered early in the morning the squatted building in Ronda Sant Antoni 12, downtown Barcelona. Squatters started living there a year and 8 months ago and opened a “Free University” called La Rimaia. In the past, this kind of evictions were followed by almost immediat new “building occupations”, we will see if that is the case this time. (pictures taken from twitter @galapita)