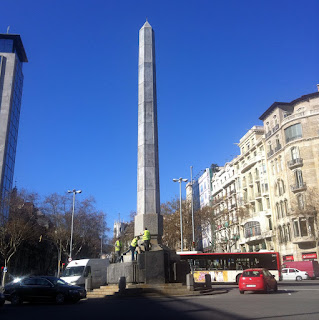 You would be surprised to see how many monuments or street names you can still find in Spain that remember the Franco regime. This is not the case in Catalonia, where most of them have been removed. Not all of them, there are still some “old” regime signs for example in small villages near the Ebro river. Also in Barcelona you can still find signs of the Franco governement in some buildings that were built at the time by the Spanish government. What is more surprising is that, until last sunday, there was in Barcelona a monument devoted “to the victory” of Franco at the civil war. It was downtown, at the cross between Diagonal and Passeig de Gràcia, if you know the city. But it is not longer there, it was taken out last sunday. On wednesday they were still cleaning the area, as the video shows. The discussion now is what should be placed under the obelisc: an statue to King Juan Carlos? (since the name of the square refers to him). An old republican statue? I would leave it as it is.

#Demography / “In 2050 it will be very expensive to attract new immigrants”, says Anna Cabré, a well known demographer