#Socialmovements / Squatters, afraid of being forced out of a central building in #Barcelona 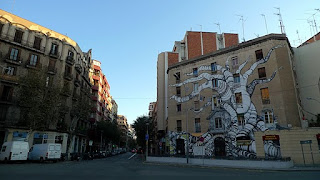 A group of squatters occupied two years ago a local building in the Sant Antoni area of Barcelona, near the market of the same name, one of the oldest of the city. They renamed the building as “La Carboneria” (The coal house) and since then have used it both to live in and as a place to develope a complete agenda of social movement activities. Now some of them are afraid that the new Catalan government will force them out and are “getting ready” to resist. The squatter movement is quite strong in the city, which is not so strange if you consider a huge unemployement rate within young people, a big amount of non-occupied buildings and the fact that an average rent for an appartment in Barcelona is around 900 €. Furthermore, the Catalan nationalist conservative (and liberal) party “Convergence and Union” is back in power and its inner-sequirity responsible, Felip Puig, declared some days ago that the new government would be not flexible at all with squatters. Previous leftists governments had been quite friendly and tolerant with squatters in the last 7 years. This week people living in “La carboneria” are looking for friends in the area to help them defend “their” building, now that the owners are asking to get it back. 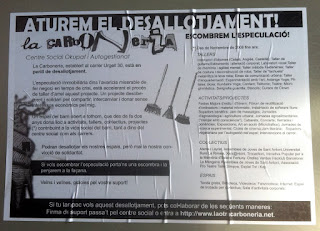