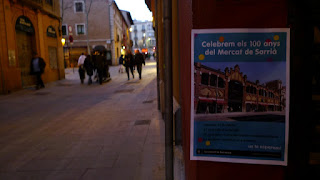 It is quite common for people living in Barcelona to buy fresh food in one of the many markets that exist in the city. La Boqueria is the best known of them, because it is placed in Rambles but every different neighbourhood of the city has its own. In Sarrià, for example, they are celebrating the 100 anniversary of their market. Sarrià used to be an independent village until 1921, when it was united to Barcelona. It is now residence of families with a high income rate, which might be the reason why their market is one of the mosts expensive markets in the city. In any case, on Saturday february the 12th, 2011 there will be a big party to commemorate the 100 anniversary.