Syrians demonstrate in #Barcelona against the regime of Bashar Al-Assad

Most of the demonstrations that happen in Barcelona finish at plaça Sant Jaume, which is the square where both the City Hall and the Catalan Government have their headquarters. Today, just one day before the end of year 2011, about 20 syrians have demonstrated in that square, shouting against the political regime of  Bashar Al-Assad and in solidarity with their fellow citizens that are suffering the terror of the syrian government. We are watching everyday on TV images that show how the people of Syria is suffering, and I like to see how some of the syrians living in my city get organised to at least show that they are thinking in those that are suffering in their country and that they commit against Syrian dictatorship. In the video above you may listen how they were singing and shouting. 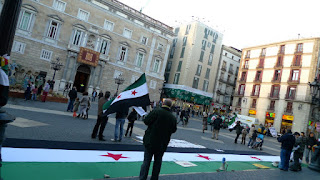