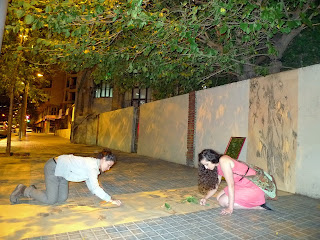 Look at that! I by chance the students of architecture, Mònica Arnilas, Anaïs Guillamón and Anahí Sanz. They study at technical  university UPC in Barcelona, and on Sunday night they were trying to ‘enlarge’ a garden at Casa Tosquella, a house built in the XIX century in Sant Gervasi (an uppertown area of the city). They were trying to make it look as it did before a big way (Ronda General Mitre) was constructed in front of the house in the 70’s. And they did it last sunday night by drawing trees on the sidewalk… It is a project for their studies, for a subject of professor Jordi Adell. Yes, Barcelona is different!

(More pictures here and info about the project here)