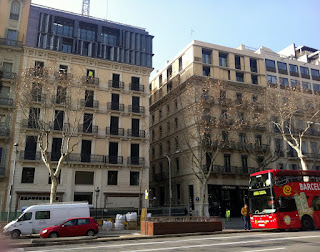 The reconstruction of the building owned by Amancio Ortega (a businessman owner of the Zara clothing empire) at Passeig the Gràcia 93 seems to be almost ready. The Ortega family has rebuild, at the most expensive area of Barcelona, this whole construction placed at the corner of ‘Passeig de Gràcia’ with a narrow street called ‘Passatge de la Concepció’. 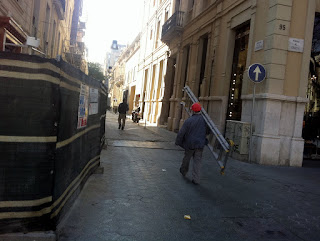 Sometime ago I was told that Amancio Ortega wanted to keep the top floors for family residence use. On the contrary, he will not use the comercial spaces to open more Zara’s in Barcelona but to rent it for 25 years to the Santa Eulàlia shop, that has been “always” there. It is one of the oldest and more expensive clothing shops in Barcelona, the place were many of the richest families of the city buy their shirts and trousers. Amancio’s mother used to do some sewing for the Santa Eulàlia business and this is why Mr Ortega wants to continue renting it to that shop. 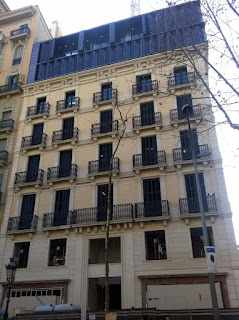 As you can see in the picture, the building is two floors higher than what it used to be. This used to be a very common way to increase the number of appartments in a building in Barcelona but nowadays it is usually not allowed. It was this time and the result is not so bad, is it?

Thousands of people have visited the expo of photoreporter #CatalàRoca , that closed yesterday

Demonstration in #Barcelona for the legalization of marijuana