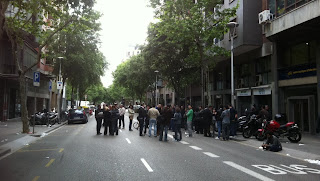 We don’t know what is still to come but, for sure, this Spring of 2012 will be remembered in Barcelona as a time of constant demonstrations. This afternoon it was the turn of some workers of “Ferrocarrils de la Generalitat”, which is the Catalan Government owned Train Network. Although they were not many, they were monitored by 8 police vans, because protesters were not allowing cars to pass. They are angry because government wants to reduce (3%) their salary again and because they consider that they have worse conditions than other similar Spanish public transportation networks.  By the way, this train company, Ferrocarrils, has always been a perfect network: punctual and serious. Hope the crisis will not make the system loose its qualities.