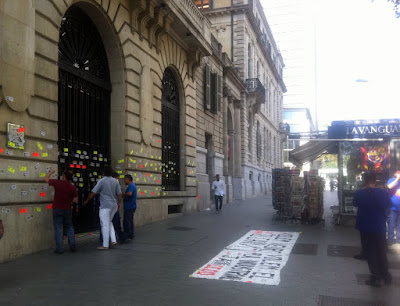 Workers of Yamaha have used this morning some of the words that Pep Guardiola -coach of FC.Barcelona- pronnounced some days ago at the Catalan Parliament –as previously explained in this blog-. During a protest in front of the Catalan Ministery for Business and Economy they shouted against corruption and against FX Mena -the Catalan Minister for Economy, who is a well recognized teacher at ESADE, a top business school of the city.

They also used Pep Guardiola’s words, as you can listen by watching the video: “We also wake up at 7 AM to work and make this country prosperous”. The words of Guardiola at the Parliament -were he was given a gold medal- were very similar:  “if we wake up early in the morning, very early, with no reproaches to anybody and using no excuses, and we start working hard, we are an unstoppable country. Believe me that we are unstoppable. Long live Catalonia!”