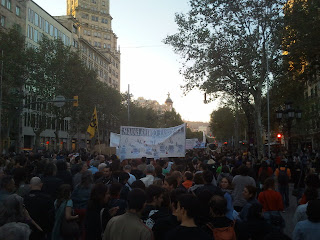 Around 2000 people marched on Saturday (october 13th) in Barcelona, following the international call to march (Globalnoise, “A global day of action”).

The march at the Catalan capital followed the slogan “No devem, no paguem”, which means “We have no debt, we will not pay”.

There is a ‘manifiesto’ (read it here)  were you can read (in Catalan, Spanish and English) what the march was specifically asking and protesting for in Barcelona: “Far from serving the population that supposedly subscribed it, debt has been destined to finance the interests of financial powers and private companies. Profit is never socialised. Nevertheless, we see how the losses are not only socialised, but the practical totality of them fall on our shoulders; the common people”.

The march ended in front of the offices of CDC, the political party which is in power right now in Catalonia.