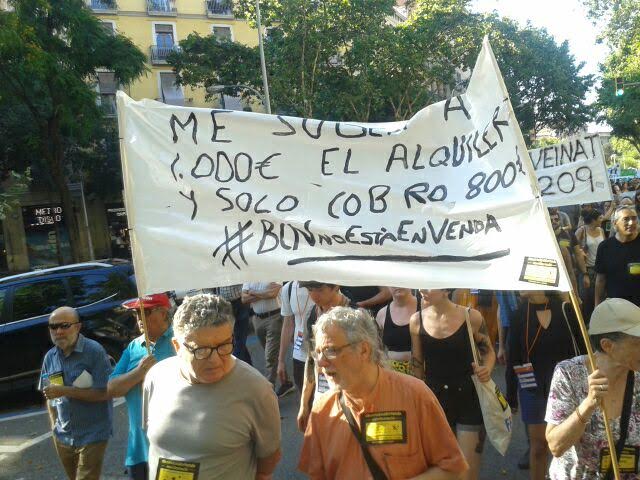 Are you a tourist visiting Barcelona? Be welcolme and don’t get angry to locals if you see signs in the street calling against tourists. It is not you, individual tourist, who we hate. We are also tourists: we like to visit London, Paris, Prague, Berlin, New York, San Francisco, Thailand and as many international places as possible. But it is true that the affluence of tourists to Barcelona has become so extrem that it is resulting in some changes that we dislike and that should be stopped.

It is not good for anybody -neither for tourists nor for locals- that the city becomes an Amusement Park. On the other hand, both to buy or to rent an appartment is becoming impossible for people from Barcelona and many citizen are finding it impossible to stay in the Catalan capital. This increase is due to speculators that buy buildings to rent them to touristis. This model of city is completely unsustainable and should be changed. 3000 people demonstrated yesterday in the area of Sant Antoni to protest against this reality and to express that “Barcelona is not on sale”.

Do they fine cyclists in your city? In Barcelona, they do, but a better strategy is needed

My generation (1971) has seen the (re?)introduction of bycicles in Barcelona for day-to-day use. Many people, standard people (not just echologysts as happened in the past) use bycicle to go work, to go home, to see friends, to move around the city. As you may know, in the past years Barcelona has improve its network of bike paths. And as bycicles become a standard  mean of transport, fines to cyclists are also becoming usual. Many people where desiring it, and some journalists were asking it to happen. I agree that fines must also apply to cyclists but I disagree in the way they are being applied. As a usual city cyclist I see everyday people breaking basic rules, and they are seldom fined. On the contrary,I have seen local police fining easy-to-fine middle age people for minor circumstances. In my opinion, city authorities are missing a clear an efficient fine-strategy for bycicles and this is a pitty for the future of bycicles in Barcelona because a clear and efficient regulation that avoids conflicts in their circulation is needed.

Around 1000 people demonstrated some days ago in Barcelona, against Mass Tourism and Housing speculation. Don’t read it badly: it is not that people in Barcelona are against tourists. In fact, I would say that locals are very helpful towards tourists and proud to have them visiting the city. As long as they respect day-to-day life in Barcelona, which they usually do. The problem is, first of all, that the huge and almost crazy increase of visitors in the last years is resulting in a crazy inflation of housing prices, which is forcing many residents to leave the city. And the problem seems to be increasing due to the arrival of investors that are buying buildings at prices that locals cannot pay. On the other hand, the presence of tourists in many areas of the city is creating the feeling to many citizens of Barcelona of being part of an amusement park. On the contrary, if one element defines Barcelona is the fact of being a city of villages, a city of cities, each of them with strong and differenciated life: Gràcia, Sants, Sarrià, Eixample, Sant Antoni or Sant Andreu, to mention some of them. It is an obligation of local authorities to defend this heritage, which also makes  the city attractive to visitors.

If you come as a tourist to Barcelona and you take a train at passeig de Gràcia station you will soon realise that it is under renovation works. The problem is that it is taking long for the responsibles of the station to finish these works: the station has been like this for the last two years! Nobody is giving public explanations for such a delay in the works being done in one of the two main stations of the city. Who knows how long it will take for the citizens of Barcelona to be able to be at the station confortably.

The detention of Montse Venturós -the mayor of Berga, a town one and a half hours from Barcelona, in the Pyrenees, well known for its general social support for the independence of Catalonia- has resulted in the image you see, a Catalan independentist flag been shown during hours at the Barcelona City Hall facade. The flag has been put during a demonstration in support of the mayor of Berga, accused of having allowed an independentist flag been shown at the facade of Berga’s City Hall during the past Spanish election.

Where to eat a good hamburger in Barcelona and be original? At the Ocaña bar, in plaça Reial

If you are willing to eat a good hamburger at an original place in Barcelona, I recommend you to go to bar Ocaña at plaça Reial. It takes the name after Ocaña, at the time a young man from Andalusia that came to live in Barcelona, at plaça Reial, to come out as a gay and trans. He represents the underground movement of the 70’s and early 80’s. He died young in an stupid fire accident during a visit to his village. 30 years lates the Ocaña bar has recovered his spirit and offers one of the best places to sit and understand Barcelona while eating of dancing. The Ocañas’s hamburger is made of meat from la Boqueria, one of the main markets of Barcelona, at les Rambles, closed to the restaurant. Is you go there tell me how you liked it. By the way, the bar is only lightened with candles.